PeaZip is an open source file and archive manager. It’s freeware and free of charge for any use.

PeaZip can extract most of archive formats both from Windows and Unix worlds, ranging from mainstream 7Z, RAR, TAR and ZIP to experimental ones like PAQ/LPAQ family, currently the most powerful compressor available. 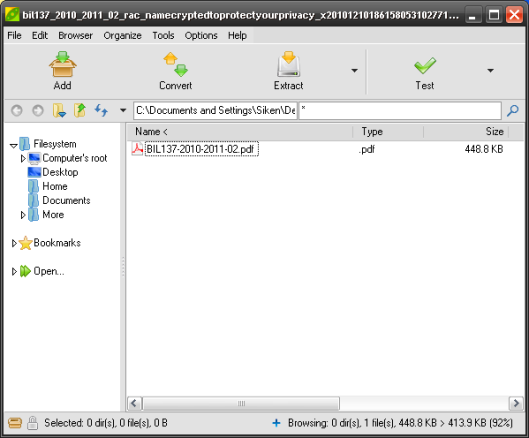 Copyright (C) 2007 Free Software Foundation, Inc. <http://fsf.org/>
Everyone is permitted to copy and distribute verbatim copies of this license document, but changing it is not allowed.

“The Library” refers to a covered work governed by this License, other than an Application or a Combined Work as defined below.

A “Combined Work” is a work produced by combining or linking an Application with the Library.  The particular version of the Library with which the Combined Work was made is also called the “Linked Version”.

1. Exception to Section 3 of the GNU GPL.

You may convey a covered work under sections 3 and 4 of this License without being bound by section 3 of the GNU GPL.

If you modify a copy of the Library, and, in your modifications, a facility refers to a function or data to be supplied by an Application that uses the facility (other than as an argument passed when the facility is invoked), then you may convey a copy of the modified version:

a) under this License, provided that you make a good faith effort to ensure that, in the event an Application does not supply the function or data, the facility still operates, and performs whatever part of its purpose remains meaningful, or

b) under the GNU GPL, with none of the additional permissions of this License applicable to that copy.

The object code form of an Application may incorporate material from a header file that is part of the Library.  You may convey such object code under terms of your choice, provided that, if the incorporated material is not limited to numerical parameters, data structure layouts and accessors, or small macros, inline functions and templates (ten or fewer lines in length), you do both of the following:

b) Accompany the object code with a copy of the GNU GPL and this license document.

You may convey a Combined Work under terms of your choice that, taken together, effectively do not restrict modification of the portions of the Library contained in the Combined Work and reverse engineering for debugging such modifications, if you also do each of the following:

b) Accompany the Combined Work with a copy of the GNU GPL and this license document.

c) For a Combined Work that displays copyright notices during execution, include the copyright notice for the Library among these notices, as well as a reference directing the user to the copies of the GNU GPL and this license document.

d) Do one of the following:

1) Use a suitable shared library mechanism for linking with the Library.  A suitable mechanism is one that (a) uses at run time a copy of the Library already present on the user’s computer system, and (b) will operate properly with a modified version of the Library that is interface-compatible with the Linked Version.

a) Accompany the combined library with a copy of the same work based on the Library, uncombined with any other library facilities, conveyed under the terms of this License.

b) Give prominent notice with the combined library that part of it is a work based on the Library, and explaining where to find the accompanying uncombined form of the same work.

The Free Software Foundation may publish revised and/or new versions of the GNU Lesser General Public License from time to time. Such new versions will be similar in spirit to the present version, but may differ in detail to address new problems or concerns.

If the Library as you received it specifies that a proxy can decide whether future versions of the GNU Lesser General Public License shall apply, that proxy’s public statement of acceptance of any version is permanent authorization for you to choose that version for the Library.